Do you remember a "semi" unbiased rendering tutorial I did? Check it here, although it´s already officially implemented to CINEAM 4D (sinceR19), it´s my favoured rendering way, because it´s very a very physical based rendering with CINEMA 4D. It´s not the fastest (eh, fast? not really) for interior shots, but it´s still so awesome. So, I tried to use it at several interior/furniture renders for my client - a furniture producer (Intedoor). It was created for ISH Frankfurth 2017. I totally did 6 different scenes/projects and renders. All of them are rendered pretty large and rendered on Rebusfarm.

My settings was to heavy, there was a space do it faster, but Im really very satisfied.

So, modeled, rendered: CINEMA 4D physical engine with no AO? no lights, even no GI. Black Magic Design Fusion used for Post production. 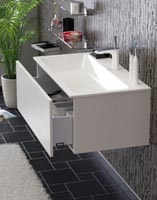